Current State of the Opioid Crisis

Opiois-use deaths (OUDs) taken from the National Center for Health Statistics (NCHS) Multiple Cause of Death microdata. Deaths are reported as age-adjusted rates per 100,000 people by residence of the decadent. Opioid-use deaths include ICD-10 codes for drug overdoses (X40-44, X60-64, X85, Y10-14) that include the presence of opioids (T40.0-40.4 or T40.6); or mental health or behavioral deaths caused by opioids (F11.0-11.9). Deaths are pooled over a three-year period to reduce large fluctuations in rates in counties with only a few deaths. Confidentiality restrictions prevent reporting rates by county. From the map below, we see that opioid deaths are highly concentrated in six main areas of the nation. The first cluster is in Appalachia, especially southern Ohio, western West Virginia, and northern Kentucky. Overdoses are caused by a mix of heroin, prescription opioids, and synthetic opioids. We also see higher rates in Tennessee and western North Carolina, but these are mainly overdoses from prescription opioids. Second, New England has also been hit hard by this epidemic, driven mostly by synthetic opioid overdoses, but also mixes of multiple opioids. A third cluster runs from St. Louis north to Chicago, essentially along Interstate 55. Deaths in this corridor are almost all due to heroin. Fourth, Oklahoma has many counties with high deaths from prescription opioid overdoses. Fifth, New Mexico has high overdose deaths from all major opioids (prescriptions, synthetics, heroin, or any mix of the three). Counties with the highest rates fall along Interstate 25 that runs through the center of the state north to south. Lastly, there is a prescription opioid overdose cluster centered on Las Vegas that includes southeastern Nevada, western Arizona, and large parts of Utah. 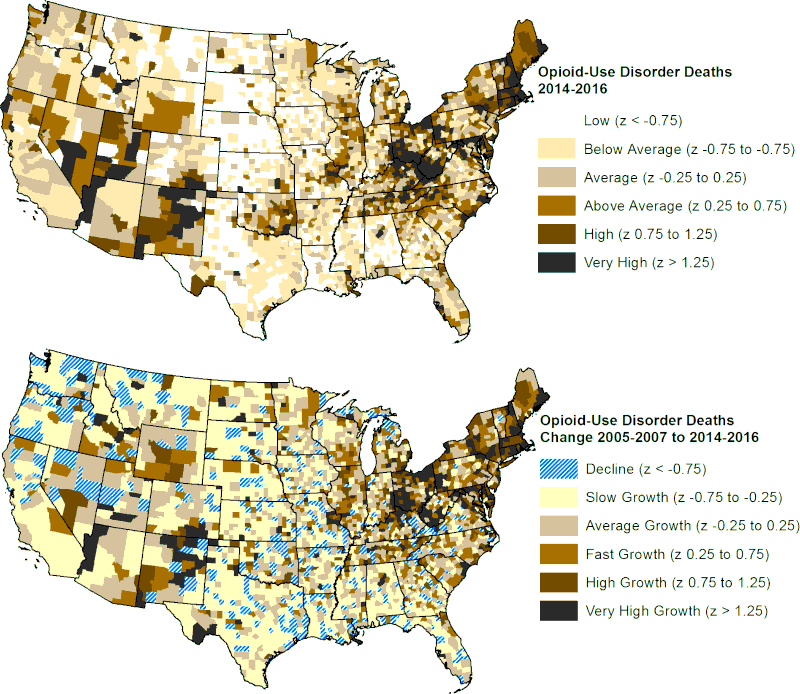 Overall, deaths from any type of opioid are generally higher in larger metropolitan areas. Deaths spiked in 2015 and 2015 in metropolitans and micropolitans, but the increase has been more modest in rural areas. In fact, completely rural counties have has relatively stable rates in 2012. In short, trends between 2005 and 2016 indicate a sharp increase in opioid deaths in most communities, except the most rural places. 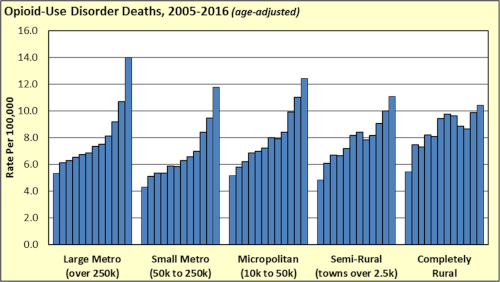 Prescription opioids are a major issue in rural America, although death rates have been falling since 2010. This may be driven by availability, since rural communities are distant from illegal drug markets, but many have a pharmacy nearby to supply this form of opioid. Few metropolitan residents overdose from prescriptions. Trends since 2005 indicate the prescription opioid crisis is abating across the country, but is still a persistent issue in rural America. 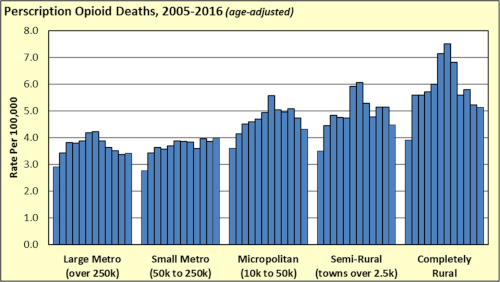 Heroin overdoses are the scourge of metropolitan America, with rates growing almost exponentially since 2010. High and growing deaths in teh nation’s ;largest cities is likely due to proximity to illegal drug markets. By contrast, rural America has relatively few heroin deaths. 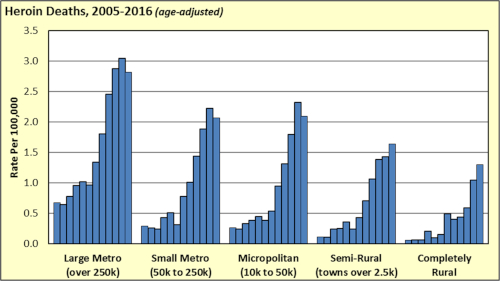 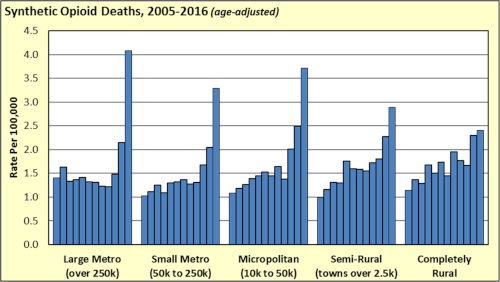 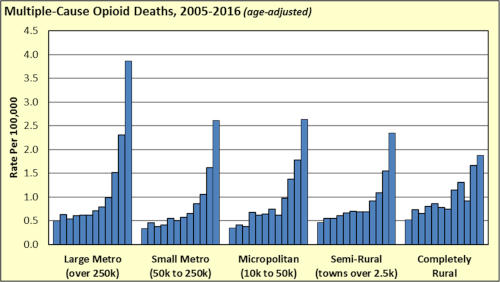